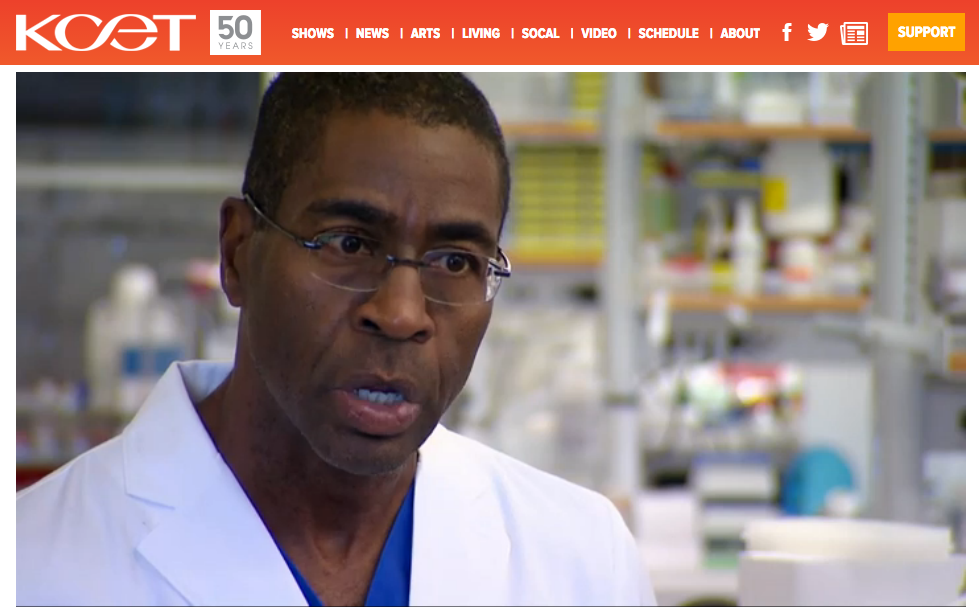 What if a compound from a common spice could help detect Alzheimer’s in patients? A team at Cedars-Sinai Medical Center is developing a test that could make early detection possible, and a first step for the patient would be taking pills derived from curcumin, which is found in turmeric, an ingredient often used in Indian curries.

Transcript from the video:

Val Zavala: My dad died with Alzheimer’s, and that’s one of the reasons I joined the board of the local Alzheimer’s Association. But even I didn’t realize that the physical causes of Alzheimer’s start developing in the brain 20 years before the first symptoms even show up. Then I heard at Cedars-Sinai Medical Center, there’s a renowned surgeon – a neurosurgeon – who’s developing a simple, noninvasive test that can possibly detect Alzheimer’s early. Can you imagine how incredible that could be? His name is Dr. Keith Black. Dr. Black and his colleagues know how important it is to be able to detect Alzheimer’s early.

Dr. Keith Black: By the time someone actually develops symptoms with Alzheimer’s disease, by the time they get memory loss and cognitive decline and behavior problems, they’ve already lost 40 percent of their brain cells.

Val Zavala: So how does the test work? Well, a hallmark of Alzheimer’s is the destructive plaque that develops slowly in the brain. The problem is, it’s invisible in live patients. Until now. They key? These little yellow capsules.

Dr. Keith Black: We’ve discovered that a special naturally occurring compound called curcumin, which is the active ingredient in the Indian spice curry or turmeric, actually binds to these abnormal plaques. This curcumin has a natural fluorescence. So what we do is that we’re able to detect this fluorescence when it binds to the plaques and the retina with a special modified retina scan.

Val Zavala: In other words, a simple spice extract adheres to the plaque and can be seen with a retinal camera, similar to the kind ophthalmologists use.

Dr. Keith Black: And the beauty of that is the eye is the window to the brain. So when you look through the eye, you’re looking at the brain.

Dr. Keith Black: All of these spots are essentially these plaques that are the hallmark of Alzheimer’s disease that we can see. So it’s very easy for the patient. We’re given three days of pills, curcumin that they can just take in a chocolate pudding. This gets into the blood, then it goes to the brain, binds to the plaques then we can see these plaques fluoresce if they are present in the retina.

Val Zavala: Dr. Black and his colleagues Yusef and Maya Coronio will be presenting the results of their research at a conference this July. But how did a neurosurgeon get interested in Alzheimer’s? Well for Dr. Black, it was very personal. His mother developed the disease.

Val Zavala: How long did your mother have the disease? 10 years she lived with it?

Dr. Keith Black: About 10 years. Because you don’t really die of Alzheimer’s disease, you die of complications. Because we could give her really good care, she didn’t die of any of the complications so she lasted a very long time. This is a very difficult disease. Not only for the patient – because after the disease becomes advanced – the patient becomes apathetic to the disease. But really more so the toll it has on the family and loved ones.