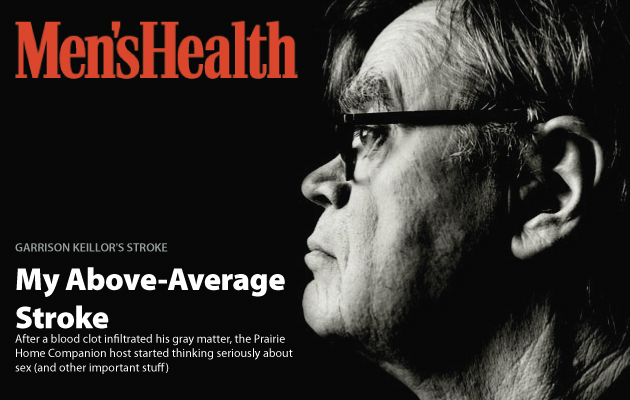 People keep asking about my stroke.

I am okay, really—not staggering around with one arm hanging limp, or glassy-eyed or slurring my speech, flecks of spittle on my lips. And yet people still say, “How are you doing?” in that special way that means, “Tell us the painful truth and feel free to cry.” Really, it was only a minor stroke, but I will tell about it one last time and then let’s move on to something interesting—such as sex or sweet corn or the Rapture—and I will never discuss this again.

Thank you for your patience.

Every 40 seconds, someone in the United States suffers a stroke. Every fourth victim is under age 65, every 14th not yet 45—and many of them never know what hit them until it’s too late. Long-term health factors may be to blame, but brain explosions in young people could also have more immediate triggers.

Intense Physical Activity
A mundane neck strain could turn deadly. “More men are staying active into their 40s and 50s—the age when arteries have begun to stiffen,” says Patrick Lyden, M.D., chairman of the department of neurology at Cedars-Sinai Medical Center. “Take a tumble on the court and stretch your neck, and it could cause a rupture of the arterial lining.” This stroke-inducing condition, called carotid dissection, occurs most commonly in the fifth decade of life, and accounts for up to 25 percent of strokes in young and middle-aged patients, according to a French study. If you feel neck pain during exercise, you should take an aspirin immediately to prevent clotting, Dr. Lyden says. Then see a doctor.