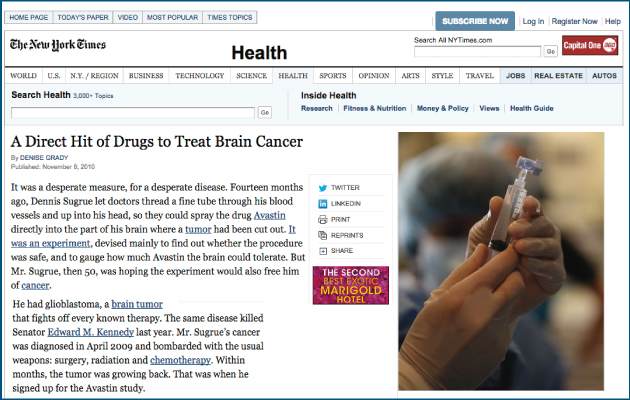 It was a desperate measure, for a desperate disease. Fourteen months ago, Dennis Sugrue let doctors thread a fine tube through his blood vessels and up into his head, so they could spray the drug Avastin directly into the part of his brain where a tumor had been cut out. It was an experiment, devised mainly to find out whether the procedure was safe, and to gauge how much Avastin the brain could tolerate. But Mr. Sugrue, then 50, was hoping the experiment would also free him of cancer.

…Dr. Keith Black, chairman of neurosurgery at Cedars-Sinai Medical Center in Los Angeles, and an expert on breaching the blood-brain barrier, said it was not clear that Avastin would work well enough to improve survival very much, even when infused right into the brain. Better drugs are needed.

“We can get drugs in, but there’s a belief in glioblastoma, for example, that even if you push the limit of the drugs you still won’t increase the survival all that much,” Dr. Black said. “It’s kind of like having the Trojan horse before we have the soldiers to put in it.”