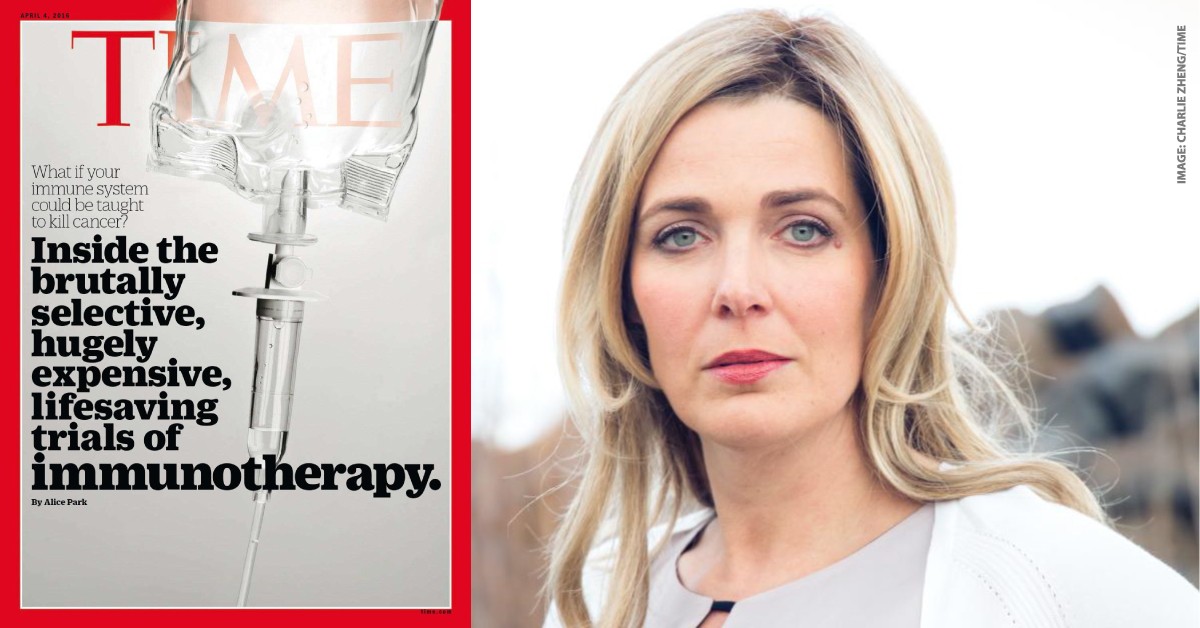 Dates are important to a person who knows he’s dying of cancer.

There’s the day when he learned he was sick. There’s the date of his first surgery, or of the first time a vein in his forearm was punctured with a tube full of poison. There are also those dates in the future–each one a temporal goalpost that represents hope when every day feels doubtful. For Mike Hindt, who was diagnosed two years ago with metastatic pancreatic cancer, that date was April 23, 2016.

That’s when the first of his four children will get married, and despite his dismal prognosis, Hindt, 56, was determined to see his second oldest say his vows. The trouble was, Mike had run out of traditional treatment options. He had already had extensive surgery and been through nearly a dozen sessions of brutal chemotherapy. But pancreatic cancer spreads so quickly that it isn’t usually diagnosed until it’s entrenched in several internal organs. In Mike’s case, it was his liver, and more of the status quo wasn’t on the table.

Since his diagnosis, Mike’s wife Veronica had made a full-time job of seeking treatment options for her husband. And as of last summer, when Mike’s doctors said they had nothing else to offer him, Veronica knew they’d have to widen their search. She ventured into the world of experimental therapies, treatments that haven’t been proven but are promising enough to be tested in people enrolled in clinical trials.

She canvassed experts, called up cancer centers and spent hours doing research online, where she learned about immunotherapy, a new approach to cancer that oncologists are calling the most promising in decades–and probably ever. Veronica read of an ongoing Duke University trial of a drug called pembrolizumab that is approved and used to treat melanoma and was showing early promise against cancers in other parts of the body too. It’s the same drug that just a few months later would send former President Jimmy Carter’s melanoma, which had spread to his brain, into remission seemingly overnight. In August 2015, Mike learned he’d been accepted into a trial for that same drug.

In principle, immunotherapy is simple. It’s a way to trigger the immune system’s ability to seek out and destroy invaders. That’s how the body fights off bacteria and viruses. But it doesn’t do that with cancer, which occurs when healthy cells mutate to outsmart those built-in defenses. That’s where immunotherapy comes in. “Instead of using external forces, like a scalpel or radiation beams, it takes advantage of the body’s own natural immune reaction against cancer,” says Dr. Steven Rosenberg, an immunotherapy pioneer and chief of surgery and head of tumor immunology at the National Cancer Institute (NCI). These strategies don’t target cancer itself but work on the body’s ability to fight it. These therapies, administered in pill or IV form, trigger the immune system to fight cancer cells while keeping healthy cells intact. For someone as frail as Mike, that was an especially appealing prospect.

In the past decade, scientists have come closer to making a reality of immunotherapy’s promise. Some trials of the latest generation of these therapies have already produced astounding results. In studies of people with certain types of B-cell leukemias and lymphomas who haven’t responded to any other treatment, upwards of 80% of them have seen their cancer disappear. “It’s unprecedented to see these kinds of results in such early trials,” says Dr. Stanley Riddell, an immunotherapy researcher and oncologist working on one of those trials with his colleague Dr. Cameron Turtle at the Fred Hutchinson Cancer Research Center in Seattle.

Market experts estimate that in 10 years, immune-based treatments will generate anywhere from $35 billion to $70 billion a year in sales. That would make immunotherapy by far the most valuable class of medical drugs in history, eclipsing the current record holder, cholesterol drugs like statins. Immunotherapy, which Vice President Joe Biden says could be “revolutionary,” is also central to the Obama Administration’s new “moon shot” to cure cancer.

There are currently 3,400 immunotherapy trials under way in the U.S. and many more around the world. These trials are hoping to prove that immunotherapy is not only a safe but also a better way to battle certain cancers–one that may eventually spare people the life-sapping effects of chemotherapy and the years of follow-up surgeries.

But it also highlights the chasm between the fast pace of scientific progress and the ability to deliver it to the people who need it most. That makes the clash between the priorities of scientists, drug companies, regulators and patients unavoidable–at least for now. Scientists are barreling ahead, trying to make some of the most impressive drugs ever developed. Drug companies are bankrolling many of those studies in the hopes of bringing to market a revolutionary kind of medicine. And regulatory agencies, focused on safety and effectiveness, push for stringent testing criteria that may shut out many patients from early access to experimental drugs.

In the balance are the nearly 7 million people around the world who die of cancer every year. A handful of them may make it into trials and see miraculous results. Others have no choice but to wait.

The immunotherapy drug that worked for President Carter is the result of decades of frustrating fits and starts. Thirty years ago, this kind of treatment was “just a dream,” says NCI’s Rosenberg. While scientists have long been attracted by the notion of turning the body’s own defenses against cancer, they hit roadblock after roadblock–the most basic being the fact that tumors arise from healthy cells gone rogue, so the immune system doesn’t see them as foreign. That’s why the first generation of immune drugs, antibodies against tumors, did not make as much of an impact as doctors had hoped.

Even so, it’s not as if the immune defenses are completely useless when it comes to cancer. Killer immune cells do infiltrate malignant cells; doctors find them when they cut open tumors. But the immune system is no match for fast-growing cancers. It wasn’t until Rosenberg showed that he could slow tumor development by activating the killer immune cells known as T cells to do their job more effectively that immunotherapy began to show promise. Still, the T-cell approach worked only about 15% to 20% of the time.

“We used to think that T-cell therapy was the safest thing in the world,” says Turtle. “But that’s probably because it didn’t work very well.” Most cancer patients still had to rely on surgery, chemotherapy and radiation. Then, in 1996, James Allison, then at the University of California, Berkeley, and now at MD Anderson in Houston, figured out how immune cells could be trained to identify and attack cancer cells. Killer T cells are actually restrained from targeting and destroying cancer cells, but by releasing this restraint, so-called checkpoint inhibitor drugs allow immune cells to attack the now exposed cancer cells–and not normal cells.

Yet testing such a new strategy carries formidable challenges. The question of who gets to try an unproven therapy is particularly loaded because of how good–how targeted–these new drugs are. Immunotherapy is largely ultra-personalized medicine, and it requires ultra-personalized trials. “It used to be that if you had lung cancer, you could find a clinical trial for people with advanced lung cancer,” says Dr. Richard Schilsky, chief medical officer of the American Society of Clinical Oncology (ASCO). “Now, advanced lung cancer isn’t enough. You have to have advanced adenocarcinoma lung cancer with an ALK mutation that only occurs in 2% of lung cancers.”

This makes it nearly impossible for patients to find an appropriate clinical trial, discouraging all but the most stubborn–people like Mike Hindt, and people like Stephanie Florence. By her own admission, Florence, 44, a photographer living in Lewiston, Idaho, had to “bulldoze” her way into a trial by being persistent to the point of obnoxiousness. Diagnosed in 2006 with a form of lymphoma, she was told that her cancer was incurable and that only 1% to 2% of people don’t relapse, even with chemotherapy and immune-cell transplants. “They didn’t think chemo was going to save me,” she says. “At one point, when I was in the exam room waiting for the doctor, I opened my chart and it said, ‘Two weeks to fatal event.’”

After trying traditional treatments with no long-term success, she found a trial of a new approach, but it was for people with leukemia, not lymphoma. She still managed to wrangle a visit with the study’s lead doctor, Dr. David Maloney, at the Fred Hutchinson Cancer Research Center. On the day of the meeting, she and her husband drove five hours from their home to meet him.

Maloney was getting ready to test the treatment in lymphoma patients, but Florence was still in remission from her previous treatment, an immune stem-cell transplant. Eager to join the trial, she followed up with several more visits, some of them unscheduled, and by sending every test result she got to Maloney’s team. She called his office repeatedly. When she didn’t hear back, she called again.

“I won’t treat patients until they have exhausted essentially all reasonable options,” says Maloney. “In addition, all of our patients have to have active disease. These treatments are toxic, and it’s not wise to get into clinical trials at the wrong time.”

The irony was that Florence had to be sicker in order to qualify for the study; only after she was done with the standard treatment and her cancer returned, as she knew it inevitably would, did she become eligible for Maloney’s trial.

The Phase 1 safety study was testing a type of immune therapy known as adoptive T-cell transfer. Doctors would extract Florence’s blood cells and pick out cancer-fighting T cells that could recognize proteins in tumor cells. These would then be genetically modified to more specifically target proteins on her cancer. With the deck stacked with these killer cells, the chances that her immune system could overpower the tumor cells would be much higher. She would then get chemotherapy to eliminate as much of her existing cancer as possible, before doctors would give her a transfusion of those immune-enriched cells, which would repopulate throughout her body and attack her cancer.

Even though she had come to view it as the only way she wouldn’t die before her 45th birthday, the guinea-pig element of the study gave her pause. Maloney’s colleagues described the risks: fever high enough to put her in the hospital, hallucinations, coma, even death. “I started crying,” says Florence. “I told my husband, ‘I don’t know if I’m doing the right thing.’” Because the study was among the first to test the treatment in people with lymphoma, the doctors could only guess at what the side effects could be. “It’s like jumping off a cliff. I realized that there are no patients who are 10 years ahead of me that I can look to. That’s me. I’m the one who is going to be that case.”

Fortunately, Florence never experienced any of those side effects–not even a fever. For a while, she worried that meant the drug wasn’t working. But after four weeks, she learned she was among the 80% to 90% of people in the trial who went into remission. “It was like my life started in that moment,” she says.