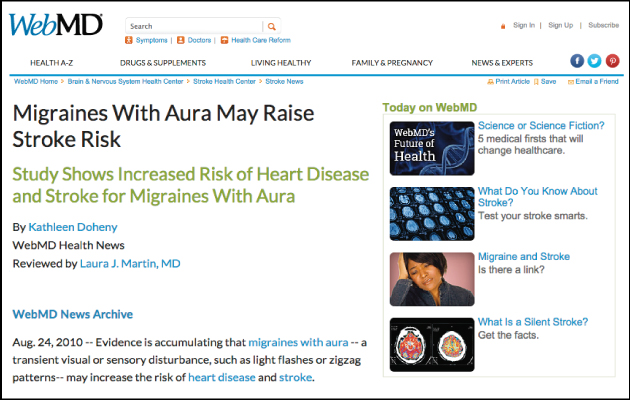 Evidence is accumulating that migraines with aura — a transient visual or sensory disturbance, such as light flashes or zigzag patterns– may increase the risk of heart disease and stroke.

Researchers have also found that migraine with aura seems to boost the risk of earlier death from any cause, including cardiovascular disease, compared to those who don’t have the condition, and that women with migraine with aura may be at increased risk for an additional type of stroke called hemorrhagic stroke.

The new research ”confirms a suspicion that many of us have had for many years, that migraine with aura is a significant risk factor for stroke,” says Patrick Lyden, MD, chair of the department of neurology and the Carmen and Louis Warschaw Chair in Neurology, Cedars-Sinai Medical Center, Los Angeles, who reviewed the research for WebMD.

The Kurth research, he says, suggests the stroke risk may extend to the hemorrhagic type.

He, too, puts the new research findings in perspective. “This does not mean if you have a migraine you should run into the ER for a heart attack workup or a stroke workup,” Lyden tells WebMD.

It does mean those with migraine should be aware of the potential increased risk, he says. “If you have migraine, you need to talk to your doctor and control your [other] risk factors [for stroke],” Lyden says. That includes controlling high cholesterol and high blood pressure.

Lyden suggests asking your doctor to review your medications for migraine, to be sure they are the best for you.